How to Compress Files Faster with Pigz Tool in Linux - DesignLinux

Written by Mark Adler, Pigz is an acronym for Parallel Implementation of GZip. It’s a nifty compression tool that helps you compress files with blazing fast speeds. As an improvement of the good old gzip utility, it leverages multiple cores and processors to compress data.

This guide shines more light on Pigz and takes you through how to use the utility to compress files in Linux systems.

Installing Pigz is a walk in the park because the Pigz package is contained in official repositories for major distributions such as Debian, and CentOS.

You can install Pigz in a single command in various distributions using their respective package managers as follows.

How to Compress Files with Pigz

To compress a single file to a zip format use the syntax.

In this guide, we will use the file ubuntu-20.04-beta-desktop-amd64.iso for demonstration purposes. To compress the file execute:

From the output, we can clearly see that the original file has been retained even after compression.

To check the contents of the compressed file, including the statistics on the compression ratio achieved use the -l option with pigz command:

From the output, you not only get to see the contents of the zipped file but also the percentage of compression which in this case is 1.9%.

For example, to compress the file with the best compression level, execute:

How to Compress a Directory with Pigz

By itself, Pigz does not have options to compress a folder, it only compresses single files. As a workaround, pigz is used in conjunction with tar command to zip directories.

To compress a directory, use the --use-compress-program argument as shown:

Compress a Directory in Linux

How to Limit the Number of Processors While Compressing

We mentioned earlier that the pigz utility tool uses multiple cores & processors when compressing files. You can specify the number of cores to be used using the -p option.

In this example, below, we have used the best compression (denoted by -9) with 4 processors (-p4) while retaining the original file (-k).

How to Decompress Files using Pigz

To decompress a file or directory using pigz, use the -d option or the unpigz command.

Using our compressed ISO file, the command will be:

Comparison between Pigz vs Gzip

We went a bit further and pitted Pigz against Gzip tool.

Here are the results:

From the comparison, we can clearly see that compression and decompression times for Pigz are much shorter than Gzip. This implies that the Pigz command-line tool is much faster than the Gzip tool

For more details on the usage of pigz command, visit the man pages.

Furthermore, run the command below to view all the options available for use with pigz command. 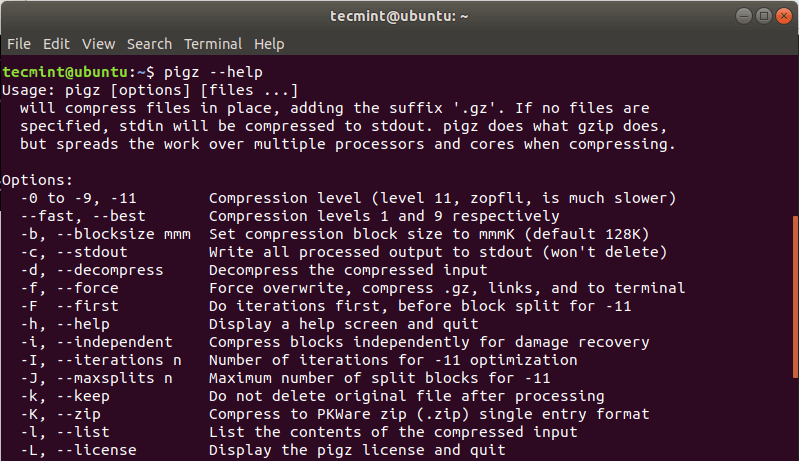 And there you have it. We have covered the pigz command-line tool and showed you how you can compress and decompress files. We went further and compared Pigz with Gzip and found out that Pigz is the better of the two in terms of speed of both compression and decompression. We invite you to give it a shot and tell us how it went.

How to Install WordPress with Apache in Ubuntu 20.04