How to Fix “Failed to set locale, defaulting to C.UTF-8” in CentOS 8 - DesignLinux

Have you ever encountered the warning/error “Failed to set locale, defaulting to C.UTF-8” in CentOS 8 or RHEL 8? If yes, then this article describes how to fix this error. Note that this article should also work on any operating systems based on RHEL 8.

A locale is a set of basic system parameters that define things such as a user’s language, region and any special variant preferences that the user wants to see in their user interface.

Recommended Read: How to Change or Set System Locales in Linux

On POSIX platforms such as Linux and other Unix-like operating systems, locale identifiers are defined by ISO/IEC 15897. For example, UNITED STATES OF AMERICA (US) English using the UTF-8 encoding is en_US.UTF-8).

The following is a screenshot showing the warning/error when you run the dnf or yum command as shown.

To set system locale, use the localectl command. For example, if you want English – UNITED STATES OF AMERICA (US) using the UTF-8 encoding, run the following command.

Next, check if the system locale has been set by running the following command.

Note that even after setting the system locale, the warning persists. This implies that the language packs are missing. To install them, go to the next section.

If a particular language pack is missing on your system, you need to install it to fix the above error. However, you can install all language packs provided by the glibc-all-langpacks package which contains all locales. 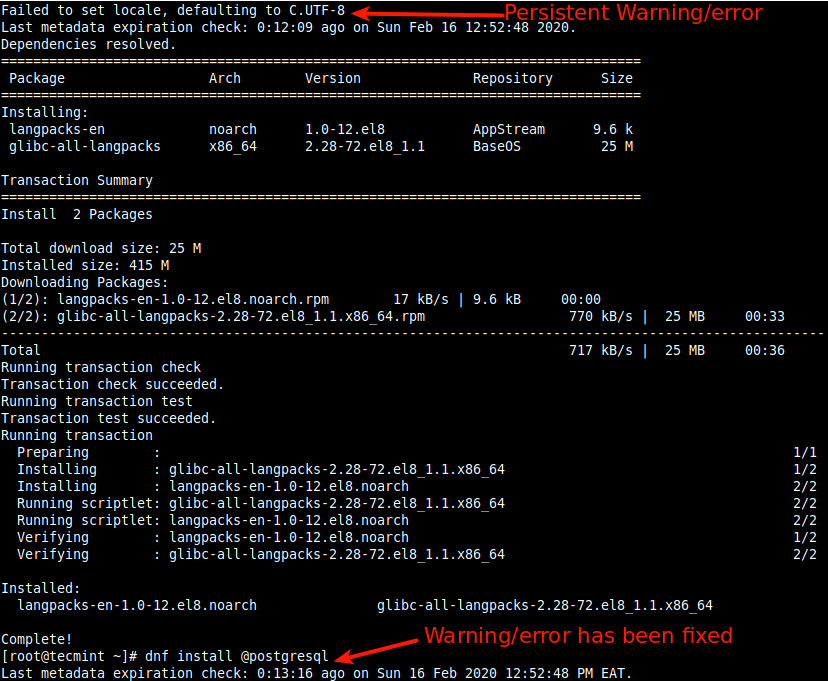 Alternatively, if you want to install locales individually, and thus have a smaller package installation footprint on your system, run the following command (replace en with the locale-code you want).

Using the above procedure, we managed to fix the “Failed to set locale, defaulting to C.UTF-8” in CentOS 8 or RHEL 8. Hoping that this worked for you as well, otherwise. give us feedback via the comment form below.

How to Install and Configure an NFS Server on Ubuntu 18.04