Varnish Cache (commonly referred to as Varnish) is an open-source, powerful and fast reverse-proxy HTTP accelerator with modern architecture and flexible configuration language. Being a reverse proxy simply means it is a software that you can deploy in front of your web server (which is the origin server or backend) such as Nginx, to receive clients HTTP requests and forward to the origin server for processing. And it delivers the response from the origin server to clients.

Varnish acts as a middleman between Nginx and clients but with some performance benefits. Its main purpose is to make your applications load faster, by working as a caching engine. It receives requests from clients and forwards them to the backend once to cache the requested content (store files and fragments of files in memory). Then all future requests for exactly similar content will be served from the cache.

This makes your web applications load faster and indirectly improves your web server’s overall performance because Varnish will serve content from memory instead of Nginx processing files from the storage disk.

Apart from caching, Varnish also has several other use cases including an HTTP request router, and load balancer, web application firewall and more.

The varnish is configured using the highly extensible built-in Varnish Configuration Language (VCL) which enables you to write policies on how incoming requests should be handled. You can use it to build customized solutions, rules and modules.

In this article, we will go through the steps to install the Nginx web server and Varnish Cache 6 on a fresh CentOS 8 or RHEL 8 server. RHEL 8 users should make sure they enable redhat subscription.

To set up, a complete LEMP stack instead of installing the Nginx web server alone, check out the following guides.

1. The CentOS/RHEL 8 ships with the latest version of Nginx web server software, so we will install it from the default repository using the following dnf commands.

2. Once Nginx installed, you need to start, enable and verify the status using the following systemctl commands.

3. If you are a little curious, you can also check the Nginx TCP socket, which runs on port 80 by default, using the following ss command.

4. If you are running the firewall on the system, make sure to update the firewall rules to allow requests to a web server.

To install the module, run the following command. 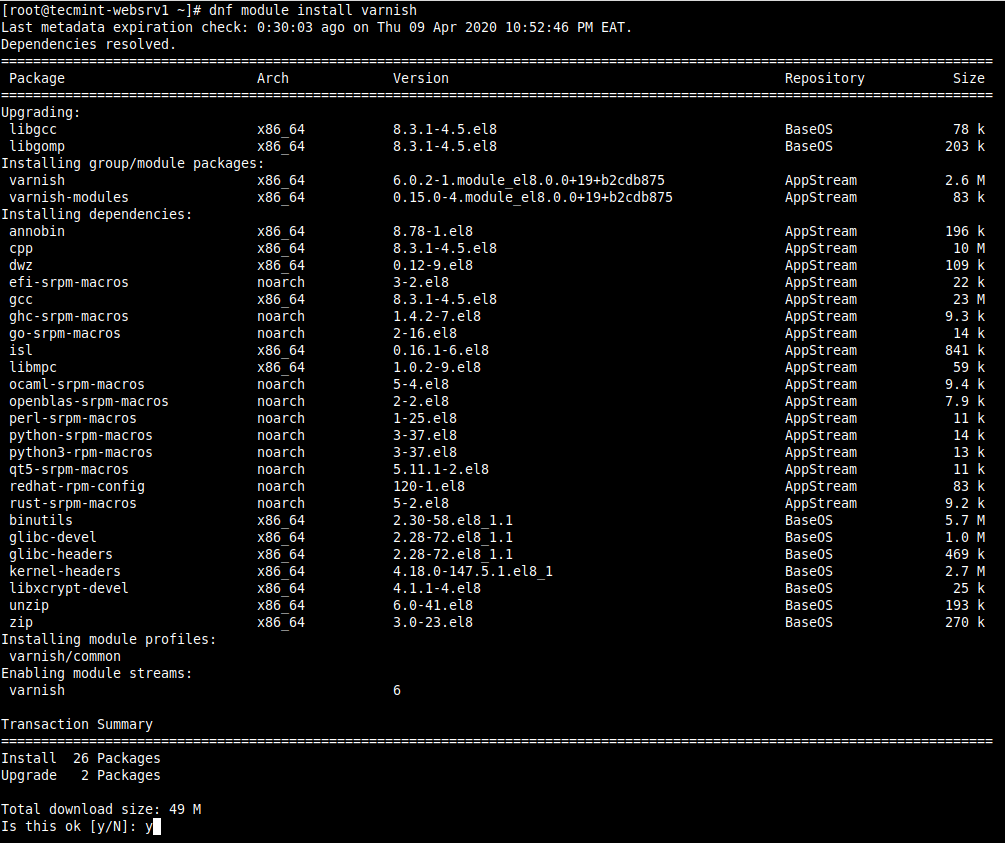 6. Once the module installation is complete, you can confirm the version of Varnish installed on your system.

7. After installing Varnish Cache, the main executable command installed under /usr/sbin/varnishd and varnish configuration files are located in /etc/varnish/.

The file /etc/varnish/default.vcl is the main varnish configuration file written using VCL and /etc/varnish/secret is the varnish secret file.

8. Next, start the Varnish service, enable it to auto-start during system boot and confirm that it is up and running.

9. In this section, we will show how to configure Varnish Cache to run in front of Nginx. By default Nginx listens on port 80, normally every server block (or virtual host) is configured to listen on this port.

For example, take a look at the default nginx server block configured in the main configuration file (/etc/nginx/nginx.conf).

Look for the server block section as shown in the following screenshot. 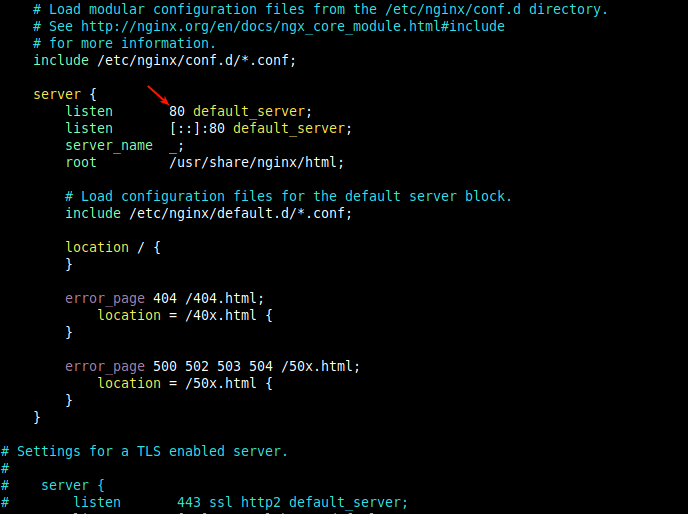 10. To run Varnish in front of Nginx, you should change the default Nginx port from 80 to 8080 (or any other port of your choice).

This should be done in all future server block configuration files (usually created under /etc/nginx/conf.d/) for sites or web applications that you want to serve via Varnish.

For example, the server block for our test site tecmint.lan is /etc/nginx/conf.d/tecmint.lan.conf and has the following configuration. 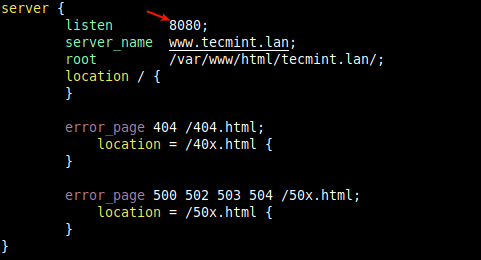 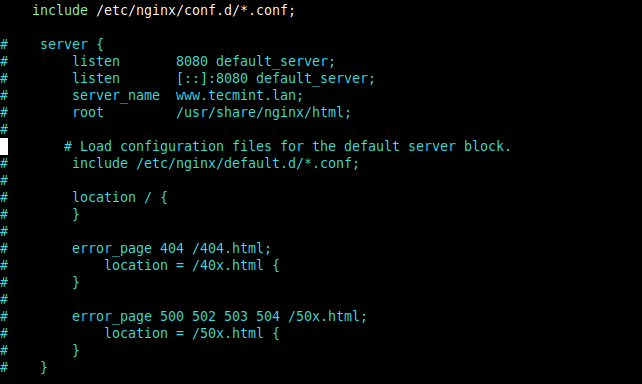 12. Next, to receive HTTP requests from clients, we need to configure Varnish to run on port 80. Unlike on earlier versions of Varnish Cache where this change was made in the Varnish environment file (which is now deprecated), in version 6.0 and above.

We need to make the required change in the Varnish service file. Run the following command to open the appropriate service file for editing.

Find the following line and change the value of the -a switch, which specifies the listen address and port. Set the port to 80 as shown in the following screenshot.

Note if you do not specify an address, varnishd will listen on all available IPv4 and IPv6 interfaces active on the server.

Save the changes in the file and exit.

13. Next, you need to define the backend server that Varnish will visit to fetch content from. This is done in the Varnish main configuration file.

Look for the default backend configuration section and change the string “default” to server1 (or any name of your choice to represent your origin server). Then set the port to 8080 (or the Nginx listen port you defined in your server block).

For this guide, we are running Varnish and Nginx on the same server. If your Nginx web server is running on a different host. For example, another server with address 10.42.0.247, then set .host parameter as shown.

Save the file and close it.

15. Now confirm that Nginx and Varnish are listening on the configured TCP sockets.

16. Next, verify the web pages are being served via Varnish Cache as follows. Open a web browser and navigate using the server IP or FDQN as shown in the following screenshot. 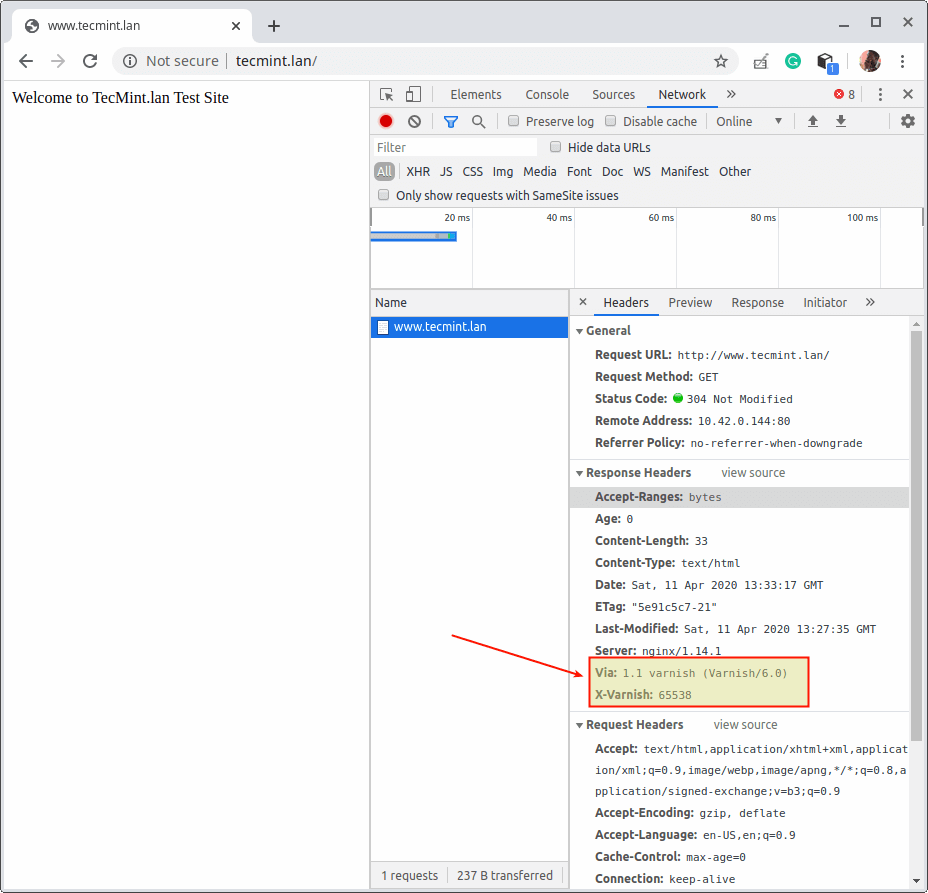 17. Alternatively, use the curl command as shown. Use your server’s IP address or web site’s FQDN or use 127.0.0.1 or localhost if you are testing locally.

18. In this final section, we will briefly describe some of the useful utility programs that Varnish Cache ships with, that you can use to control varnishd, access in-memory logs and overall statistics and more.

varnishadm a utility to control a running Varnish instance. It establishes a CLI connection to varnishd. For example, you can use it to list configured backends as shown in the following screenshot (read man varnishadm for more information). 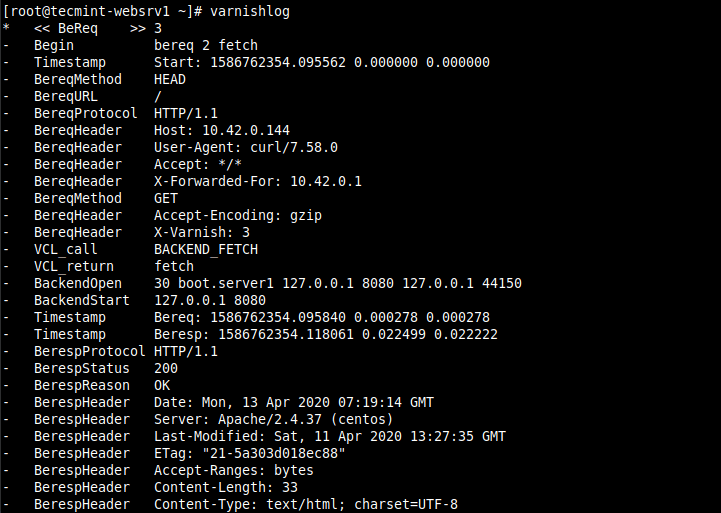 Check Info About Clients and Requests

A varnishstat also known as varnish statistics, which gives you a glance at Varnish’s current performance by providing access to in-memory statistics such as cache hits and misses, information about the storage, threads created, deleted objects (read man varnishstat for more information). 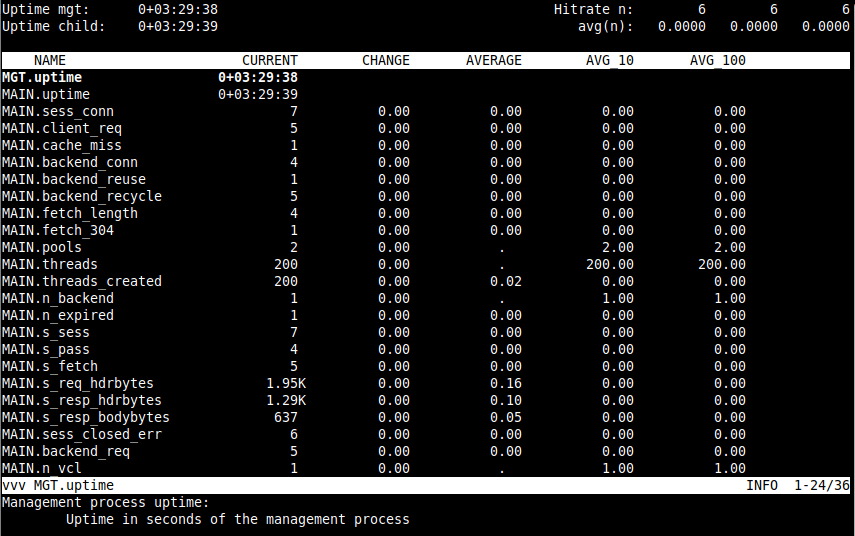 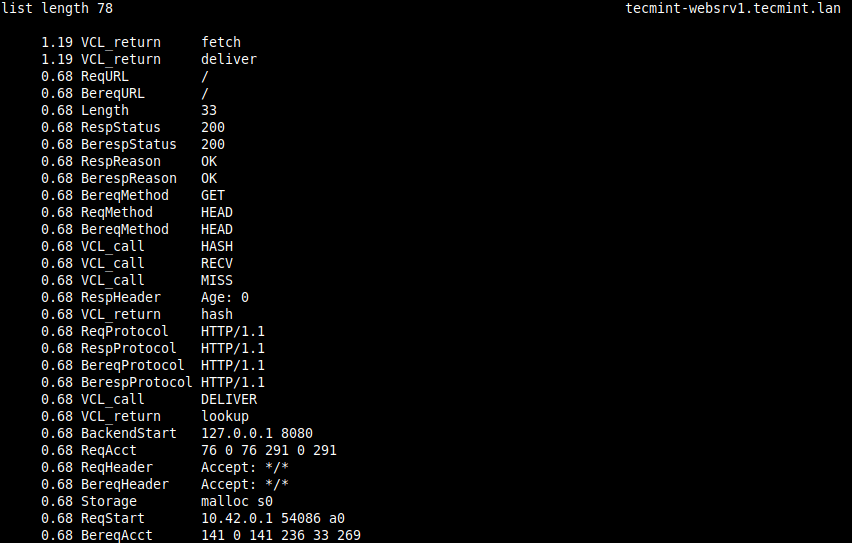 A varnishhist (varnish history) utility parses the varnish logs and outputs a continuously updated histogram showing the distribution of the last n requests by their processing (read man varnishhist for more information). 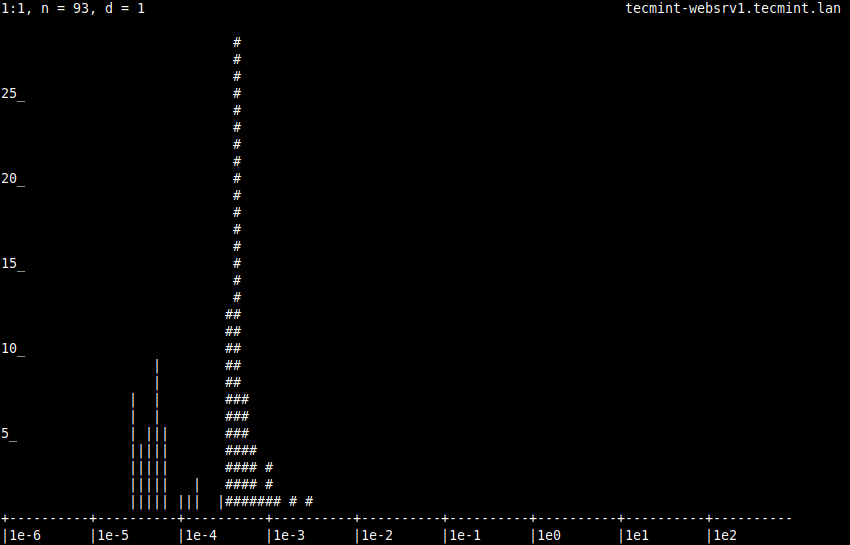 That’s all! In this guide, we have shown how to install Varnish Cache and run it in front of the Nginx HTTP server to accelerate web content delivery in CentOS/RHEL 8.

Any thoughts or questions about this guide can be shared using the feedback form below. For more information, read the Varnish Cache 6.0 documentation.

The main drawback of Varnish Cache is its lack of native support for HTTPS. To enable HTTPS on your web site/application, you need to configure an SSL/TLS termination proxy to work in conjunction with Varnish Cache to protect your site. In our next article, we will show how to enable HTTPS for Varnish Cache using Hitch on CentOS/RHEL 8.

How to Install VirtualBox Guest Additions in Fedora